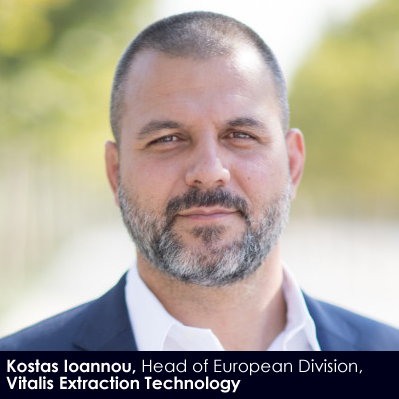 In 2018, Kostas Ioannou was looking for an opportunity to break into what he saw as a burgeoning market. At the same time, Vitalis Extraction Technology, a manufacturer of CO2 extraction systems, was looking for a representative in Europe.
“I was paying close attention to what was going on with cannabis in the States and Canada,” he says. “I knew it was only a matter of time before [medical cannabis] came to Europe. I knew that I wanted to get involved in this new industry somehow, but what I really wanted was to find somebody that was already in the industry in order to properly learn about what the industry is about… I wanted to find what the critical machinery was [behind] the cannabis industry. I reached out to a few companies, did my due diligence, and Vitalis at the time was already scouting Europe. They were touring across Europe, they stopped by Greece, and that’s when I joined the company. They wanted to have a man on the ground: someone to keep a finger on the pulse of the European cannabis industry, meet with existing and potential clients and so on. And that’s how I joined Vitalis.” It is hard to tell whether Ioannou is being literal or figurative when he talks about the cannabis industry’s “critical machinery”. Vitalis fills an important niche for medical cannabis producers: providing the literal machinery to separate cannabis out into its individual compounds. Using CO2 is not the only method of separating THC, CBD, CBG and so on from cannabis plant matter, and at least in terms of up-front costs neither is it the cheapest. But it is, says Ioannou, the method that allows producers the greatest degree of flexibility, which in an increasingly competitive market makes Vitalis’ lines of extraction systems increasingly desirable options. Quoting Vitalis Chairman and co-founder Joel Sherlock, Ioannou sums up the company’s position:

“When everyone is looking for gold, it’s a good time to be in the picks and shovels industry.”

“There are several different methods of extraction,” Ioannou says, “and I wouldn’t say that one is better than the other. On the contrary, I [would say] they compliment each other depending on what you need. It is pretty widely known that ethanol [extraction] can process biomass a lot faster and that the equipment is cheaper to buy, [whereas] with CO2 it’s very cheap to run but more expensive to [set up]. But one of the biggest advantages of CO2 is its tunability or selectability when it comes to extraction: depending on the parameters you put into the machine, you are able to target specific compounds more efficiently. CO2 basically gives you the ability to be more flexible to meet future demand when that time comes.”

Asked if he sees CO2 as the future of extraction technology for the cannabis industry, Ioannou jokes that he has a personal stake in saying yes. But joking aside, while there is a place in the industry for more than one extraction method, there is an argument to be made for CO2 systems’ efficiency besides profit: as EU legislation moves towards a consensus on production standards, investing in CO2 systems now might work to future-proof businesses against EU strictures down the line.

“Seeing [how] the EU Good Manufacturing Practice requirements in Europe are coming into play [with regard to] compliant machinery, and seeing how those standards affect production costs for the end-products in the European market, I do see CO2 as more flexible,” he says. “Of course [if you are a new cannabis producer], when it comes to building your business plan you have many other things to take into consideration: if you’re looking to make a broad spectrum CBD product, maybe it would be a lot faster to start extracting with ethanol. [But] CO2 is much more efficient and you can extract a lot more of the terpenes and the flavonoids from the biomass. But if I had to choose one - and this is my biased answer - I would choose CO2 because of that ability to target specific compounds.”

That combination of candour and in-house expertise that the company has built up over the years is another service that Vitalis can offer to prospective clients. With experience supplying the local industries in the United States, Canada, Australia and Europe, the team at Vitalis have gained valuable insight into how to build a successful operation and how the still-shifting vagaries of international licensing could affect their clients’ prospects, particularly with the EuGMP requirements of most EU countries. Of course, at the end of the day, Vitalis has multiple lines of high-tech, EuGMP compliant extraction equipment to sell - but it can also act as a guide to companies still finding their feet in a confusing and increasingly global marketplace.

“The cannabis industry globally is [still] fairly new,” Ioannou explains. “There are a few companies that have been around for a few years, but the majority are new [and started by people] who were [in other industries] before. So, when they come to us, they’re like, ‘Okay guys, we want to make extracts. How do we go about this?’ So, we make sure that we go and ask them the right questions about work and business plans. You need to have patience and a commitment and be able to foresee where the industry is going so you can make the right choices. They need a business plan; they need to know what components they need to build a business that’s going to create revenue fast and be able to expand - [but also] meet the demand two years from now. What will the technology be two years from now? Nobody has a crystal ball… [But] that’s why we see CO2 as one of the most [viable] components, if you like.”

A lack of crystal balls notwithstanding, when asked, Ioannou’s view of the industry’s future is practical and laudably big-picture. Vitalis may not produce cannabis itself, but he is cognisant that helping to create better, safer cannabis products is part of the larger battle to win over governments, legislatures and publics who still reflexively parcel medical cannabis in with street drugs. ‘Just Say No’ endures as both a mindset and a policy in so much of the world because of its simplicity and opening the world up to the benefits of medical cannabis is a slow and delicate business. Poor quality control, bad messaging or even the appearance of impropriety could lead to a public and political backlash that hurts not just those who stand to benefit financially, but medically as well.

“People compare it with the dotcom era,” says Ioannou, on balancing the industry’s rapid expansion and the battle for public perception. “In this particular [moment] it might seem that way, but we forget that cannabis has been around for a very long time. I’m not going to list the medical [benefits]; that it can treat a whole bunch of different illnesses. I think that’s for the scientists and the doctors to speak about. But what is really necessary at this point is that the cannabis industry and the people inside are able to put a good face on it: show that their products are good quality, have undergone serious testing, and show the world what the plant can do in our lives. It’s up to us to produce something that we’re going to be proud of, whether it’s the companies or the legislators that will amend legislation and allow [access to] patients all across Europe, or the patient organisations who push for patient access rights and eventually [create] a unified cannabis legislative framework.

“These are things that will take time to get to, but I think there’s been great momentum and the way to maintain that is for everybody involved in the industry to do good. If we do good, good things will come to us. We’re trying to build a sustainable and healthy industry where we can control the quality of the products and circulate them through the European Union through legal channels. If we don’t convince people that these products are going to be beneficial for patients, that’s [critical].”

For more information about Vitalis, and the services they offer visit their website